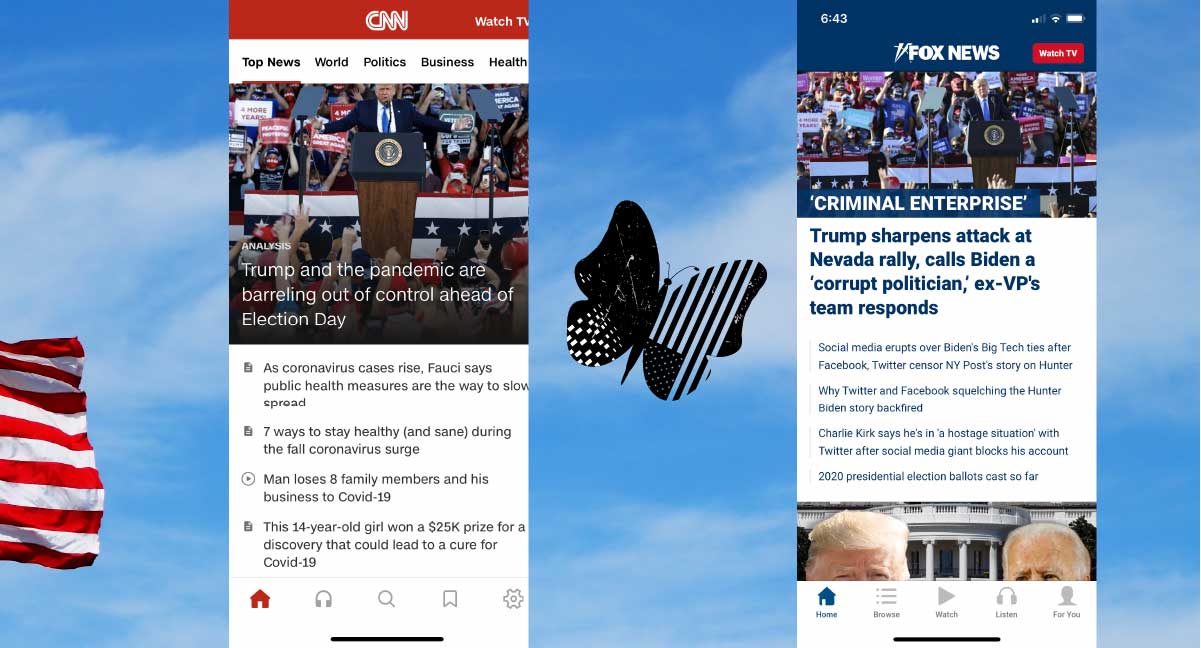 A teacher once explained a complex model for understanding truth in the world, a theory built upon the ideas of the great thinkers of the West. I had to read furiously to keep up.

At the same time they required that each day we watch the mundane MacNeil Lehrer News Hour. Jim Lehrer, who passed away in early 2020, was the go-to-moderator of his era. Each episode included thorough factual analysis and an in-depth debate involving two policy or technical experts.

The lesson I took away was, “Theory is great. But we have to also understand what is happening in practice. Even in practice, though, people see different realities.”

Yesterday morning I woke up planning to take screenshots of the front pages of the CNN and Fox News apps at the same time, 6:30am Eastern.

I opened Fox News first. President Trump was shown at a rally: “Trump sharpens attack” on the “CRIMINAL ENTERPRISE” of Joe and his son, Hunter Biden.

A minute later, I went to CNN. It was no surprise to see a similar photo of President Trump at the same rally: “Trump and the pandemic are barreling out of control…”

How were these news outlets, two of the most successful today, seeing the world so differently? Or validating their reporting?

Is Trump “out of control”?

Is the Biden family a “criminal enterprise”?

Is there really a debate whether America still needs to apply “public health measures…to slow the spread” of Coronavirus? Or is the virus a non-issue as of October 2020?

And did Kirk intend to post that “Pennsylvania just rejected 372,000 mail-in ballots” when, in fact, the actual reporting talked about ballot request errors largely due to confusing forms?

How can the same moment be so different?

A Tiny Bit of History on the News

In the last thirty years, there have been a host of books and articles written on the topic of the changing news industry. The three decades from the 1950’s to the 1970’s, a golden age of journalism, boasted primarily three news outlets in America and a raft of newspapers and investigative journals. For a few more details, Paul Steiger, founding editor of Pro-Publica, shares a quick history of journalism here and talks about how reporting has changed. My Dad would have been thrilled to hear Steiger question some of the fairness of the reporting on the Vietnam War!

In the past two decades, Fox News’ focus on big personalities and carefully serving a singular audience has won out over CNN‘s early dedication to big news staffs reporting details from around the world. CNN‘s shift to the left has kept it relevant and profitable.

Fox News has remained on top since 2002, handily leading in ratings over MSNBC (often #2) and in profitability over CNN (often #2). Facebook and Twitter have successfully allowed everyone to report the news to friends. Facebook struck a popular chord, becoming a half-trillion dollar company in a mere 15 years.

Bias In The News

While these few news outlets have succeeded and survived–arguably only by becoming more partisan or enabling partisan discussion–we have seen the collapse of newspaper newsrooms across America.

In the last twenty years we have witnessed the rise of a few next-generation internet news sites. Though often left-leaning, Pro-Publica and others have tried to redefine “old-fashioned” journalism, declaring they seek accuracy in their heavily-researched work.

Another type of news site today focuses primarily on opinion and the re-purposing of other people’s facts. We see it in Breitbart, Townhall, the new Vanity Fair, and Vox. Writers and pundits package information, ideas, and imagery. These companies have limited ability to invest in traditional journalism focused on detailed, primary research and verified fact-finding.

There are still hundreds of medium to small newspapers and news sites across the US but far fewer than in the past. They represent a range of bias profiles, from left to neutral to right.

It appears that the majority of news sites that can generate lasting profitability in today’s world are those that serve sizable niche markets, conservative, liberal, or otherwise. Even my cornerstone news source for decades, the Wall Street Journal, as focused as it is on journalistic integrity, publishes far more opinion and editorial pieces advocating ideas light years outside any reality accepted by left-leaning thinkers. The WSJ serves the bias of its primary audience well.

Given This, How Do Americans Think About the ‘News’ Today?

Economic reality has driven most news sites to a singular way of looking at the world. To survive, they must use the words that resonate with their audience. To their non-audiences, these words often seem biased and fake.

In this survey, only a small number of Republicans (on the right below) found any national sources unbiased, even those published by the Right. Only two sources were thought unbiased by a few more than thought them biased: Fox News by 3% and WSJ by 2%. CNN and MSNBC were universally thought biased. A definitive number deemed even Breitbart significantly biased.

Democrats (on the left below) remained far more accepting. They have more faith that much news is unbiased. They lean strongly towards thinking sources like the AP, NPR, CBS and even the WSJ are unbiased. They doubt MSNBC and Vox a little. They think Huffington Post, Mother Jones, Breitbart, and Fox News significantly biased. 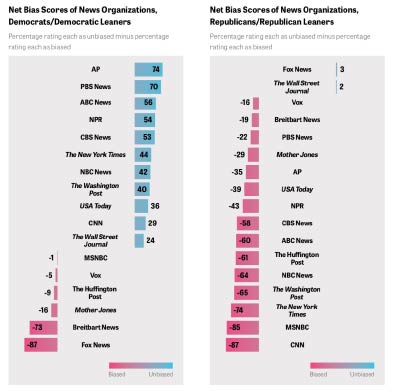 The above chart and data is copyrighted 2018 by Gallup, Inc.

Are They Even Trying to Deliver News?

It is possible that “news” is no longer “journalism” as Americans once thought about it. Journalism is commonly described as the reporting of things that really happened but are not widely known.

Through social media, Americans are able to create their own news, with their own videos, and their own on-the-ground observations. Most Americans are more likely to pay attention to these independently-reported sources. Effectively, we have stripped away ad revenue from all but a few of the most successful news organizations. And those successful organizations have had to focus on more and more narrow audiences.

So, the question becomes, “If news is no longer primarily about ‘journalism’ as it commonly was, what is the purpose of our ‘news’ outlets?”

An interesting place to look is how our news outlets describe themselves. The “Terms of Use” published by online news sites are prepared by legal and business teams to protect their enterprises from customers with unrealistic expectations of the “product” they are receiving. And from customers with harmful intent.

Fox News goes further, declaring that its content is for “your personal enjoyment and entertainment…”

Having spent years engaging regularly with business lawyers, I am tempted to think, “Hmmm…this could be the practical legal structure of things. Companies simply have to say this stuff.” I searched beyond my initial examples.

MSNBC‘s language is wildly generic. It never says anything about the purpose of the services the many NBC properties provide. Its Terms exist, it appears, purely to limit any corporate liability.

NPR, at one time called National Public Radio, seems a little different. Founded in 1970 as a public entity, it operates independently today, with typically less than 3% of its funding from federal sources. Though it certainly benefits from its tax free status. In 2019 it reported revenue about one-fifth that of CNN and around one-twentieth of the new First Fox Corp.

NPR‘s terms and conditions have less legal-speak in them and a lot of detail. It takes a while to find the sentence that says, “NPR is an organization committed to the highest journalistic ethics and standards…”

The Alabama Political Reporter is a local news site considered “least biased” by mediabiasfactcheck.com. It offers no Terms and Conditions but does explicitly declare the following: “The purpose of APR is to produce honest and accurate reporting that informs, educates, alerts and calls citizens, lawmakers and business leaders to action to insure the people of Alabama are represented by the best government possible.”

If we can believe that organizations exist for purposes beyond simply maximizing shareholder value, it is possible that these words do mean something.

Terms of Use (October 2020): What Do Leading News Companies State They Exist For?

CNN
“The content, data, video, and all other material and features on the Site are presented for the purpose of providing entertainment, news and/or information … SUCH INFORMATION IS DESIGNED FOR EDUCATIONAL AND INFORMATIONAL PURPOSES ONLY.”

FoxNews
“Company furnishes the Company Sites and the Company Services for your personal enjoyment and entertainment.”

NPR
“NPR is an organization committed to the highest journalistic ethics and standards and to independent, noncommercial journalism…”

It is hard for any of us to find news we think wholly unbiased today. For good reason! To thrive, news outlets have had to tailor their content, coverage, and bias to meet the wants of narrow segments of customers with similar outlooks.

What this means is that we, personally, have to create our own healthy diet of news and information. No single news source is good alone. Doubling up on news with the same bias isn’t that helpful, either.

Try out mediabiasfactcheck.com and similar tools. They provide a comprehensive assessment of the bias of a wide array of news outlets.

The Mind Diet: Let’s not rely upon our phone’s news feed or social media! Pick two or more different news feeds from opposite sides of the bias spectrum, whatever spectrum we focus on. Add in weekly servings of two or more additional sources with different biases to get the vitamins and minerals our minds need to remain healthy. If possible, throw in an occasional serving from a source outside of the United States. We should all keep on trying new things!